This section will briefly cover some general advice on interpreting and reading historic areas and landscapes but is not meant to be an exhaustive resource. We recommend venturing out into your local area and observing and noting all that you see including buildings (particularly looking above ground level), open spaces, green spaces, street patterns (are they linear, curved etc) how has development taken place (this may be associated with street pattern) is the village centre around a central nucleus, or dispersed over a number of streets?

The below gives some more detail on some of common areas and landscapes across Lincolnshire.

Historic Village Cores
The historic core of a settlement is an interesting area to identify. This core will likely include buildings such as a Church and Hall often linked to the administrative running of a place historically. Other features of a village core may be green space such as a village green, or small open areas used for animal holding such as sheep or pin folds. A very helpful method of identifying the historic core of a village is map analysis using historic Ordnance Survey maps. Analysis of a maps allows for better "in the field" comparison of features including buildings, trees and open spaces.

Military Bases
In Lincolnshire, military bases are a more common area found in the landscape particularly the wide range of Royal Air Force bases built before or during the Second World War. Not only did these bases bring military structures and usage, but also often resulted in development of domestic dwellings to accommodate servicemen and women and officers alike. Active military bases have restricted access, however former bases can often be visited and surveyed. Features such as built structures can be quite common, things such as runways can be noted though often they are better spotted on aerial images. There is a vast around of research around these sites that can be found online.

Churchyards and Cemeteries
These areas often have some thought and design intent placed into them. Churchyards are often more organic developing around its parent Church, containing gravestones or other memorials in an area otherwise laid to grass, these areas often include some specimen tree planting and wildflower meadows. Cemeteries can be a more formal affair with design intent behind their layout, often with axial avenues and vistas of particularly monumental memorials or cemetery buildings such as chapels. Cemeteries often have planting schemes for both flowers and trees.

Public & Private Parks & Gardens
Some general principles to consider when reading a landscape relate to the feel of the design, is it formal (very linear, organised planting, intervention of man is clear) or it may be informal (mimics nature, serpentine or sinuous lines) though often landscapes contain both elements.

Public & Private Parks and Gardens can be both bounded and boundless and it can sometimes be difficult to draw a line around these landscapes. Many landscapes appropriate features around them from buildings to the natural topography of an area, or even whole villages. Landscapes can be mercurial, changing all the time as the seasons come and go. A key and often long lasting feature of these landscapes are trees which can be noted during field survey and then corroborated against historic mapping, thus helping to identify historic areas of a landscape. The type of tree and how they are planted can tell us a great deal about a historic landscape, specimen trees such as Cedar of Lebanon which are not native to England are often planted on their own, whereas more native species are planted in clumps, or belts. This could be done to mimic nature, or create or block views to and from the landscape and its parent house. A small 19th century landscape. Using the slopes of the Wolds AONB with a mixture of individual planted and belt planted trees. A small pond provides further interest. 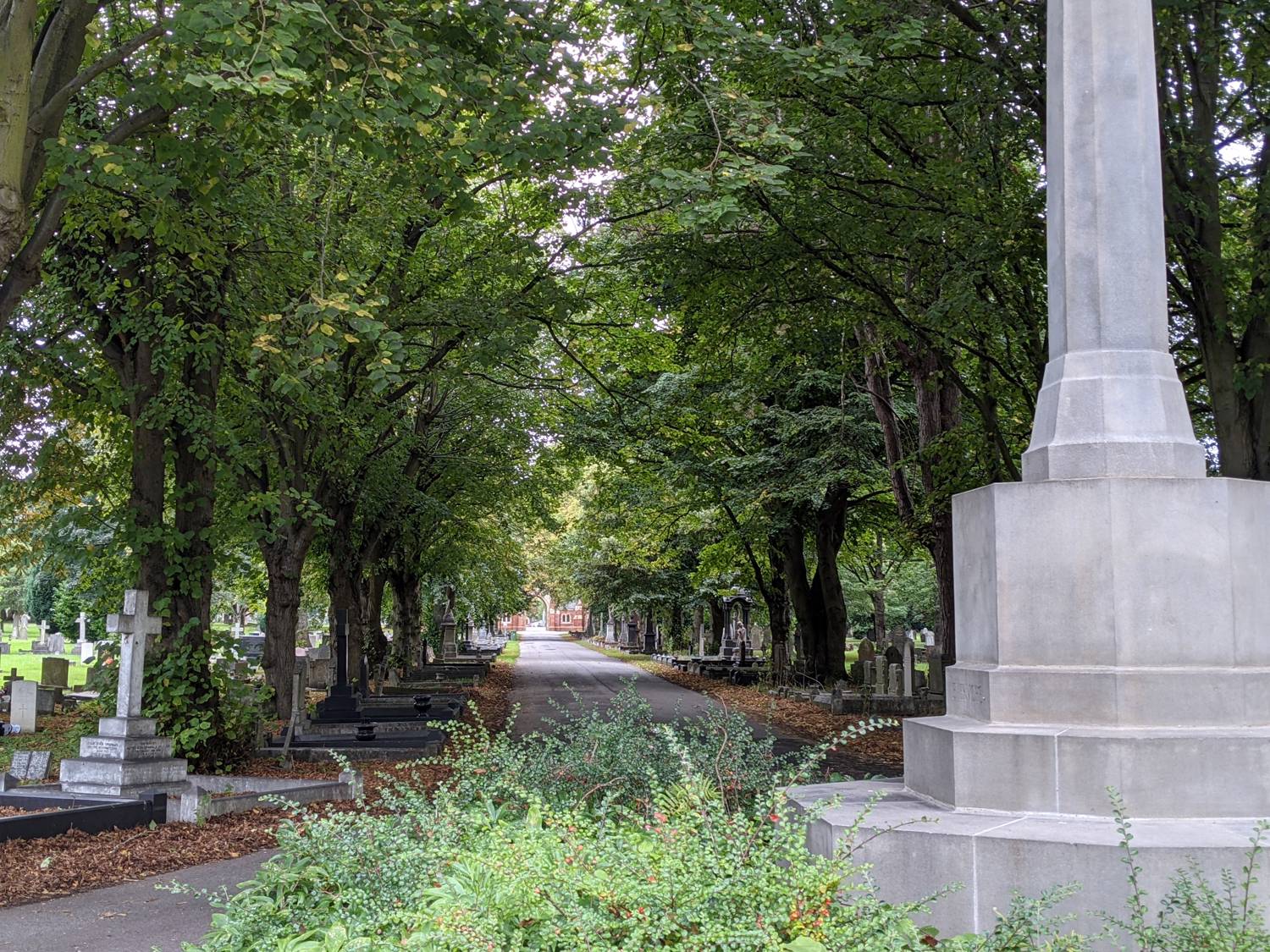 Avenue within Scartho Cemetery in Grimsby looking back towards the Cemetery Chapel from a memorial.

One of the runways of the former RAF Waltham Station. Little of the base survives and the site is currently used as an industrial estate. This tarmac area is the former East-West runway.