Archaeological earthworks can be found all over the countryside to the point that you might not even know you are looking at one. Even faced with a clear example of earthwork it is not always easy to determine which of many types you are actually looking at unless you already know what to look for. With that in mind this guide will outline the main types of earthwork and their characteristics accompanied by example images which could as a basis of comparison when identifying archaeological assets.

Barrows
Barrows, sometimes called tumuli on early maps, are mounds of earth and/or stone of various scales that are characteristic of the prehistoric period from about 5,800 to 3,4000 years ago, however a few have been dated to around 1,200 years ago. There is wide variation in their construction and as such there are many types of barrow, this section of the guide will briefly outline the main types found in the UK.

Deserted (or Shrunken) Medieval Villages
A Deserted Medieval Village is a former settlement which was abandoned at some point during the Medieval period, the only traces left often being a series of earthworks. Said earthworks can often reveal the position of buildings and general layout of the village when seen from above.

Fishponds
Fishponds and stew ponds, written in the plural as multiple ponds are often found next to each other, were a common feature of the Medieval landscape providing a regular supply of fish for the winter and the many days of fasting observed by the Christian calendar. Rectangular in shape, fishponds were usually built near a supply of fresh running water, stream, rivers and becks, and were connected to these through small channels. A series of ponds would be constructed for fish to be moved between as they grew. The stew pond was used to purge fish of muddy water before they were cooked. The fishponds consisted of a rectangular depression surrounded by four raised earth mounds, one wall of which was often re-enforced with stones. Fishponds are often associated with monastic sites, due to religious orders’ strict diets, and high-status sites as a food supply and later in the 17th-18th century as garden ornaments.

Ridge & Furrow
Ridge and Furrow is the pattern of ridges and troughs created when a patch of land is ploughed, if the pattern is still visible today it means the field has not be ploughed since. It possible to provide a provisional date for ridge and furrow by looking at the curvature of the lines. If the furrow, the depression in the field, is slightly curved to the left in a reverse s-shape likely dates to the early Medieval period. This is due to that fact that Medieval ploughs were pulled by small teams of oxen and by making a curve at the end the oxen and plough had a gentler turn meaning they could be pulled round to line them up for the next furrow without pulling the plough out of the ground. As ploughs improved and oxen were replaced with heavy horses less turning space was needed, meaning later Medieval furrows were often straight.

Rabbit Warrens
Almost the reverse of a fishpond, a rabbit warren, sometimes called pillow mounds due to their shape, looks like a rectangular raised earth mound with a moat like ditch around it. Medieval warrens were constructed with a layer of stone at the base of the mound to prevent rabbits from burrowing out and escaping and the ditch around the mound would be filled with water for the same reason. Pillow mounds are not exclusively associated with elite sites however they are often a feature of high-status landscapes. Though used during the Medieval period rabbit warrens were very common in the Lincolnshire Wolds during the 19th century, providing rabbits for the areas booming fur export industry. The immediate area around Brigg was particularly crowded with artificial warrens.

Moats
Moats are a linear, often square archaeological feature found around a castle or manor house. Moats are dug into the ground and often fed by a nearby stream, beck or other water source. Moats are often associated with being a defensive feature, however the function of them can be open to interpretation with some suggesting as time passed they were more of a defensible landscape feature. Some are recorded as being dug around other enclosures, not necessarily just buildings. Moats can be found in physical form and as aerial imagery within the landscape. Often they can be incomplete with only several extant arms.

Mottes / Mounds
Mottes are closely associated with early forms of Castles. With a motte being created from heaping the earth around it to provide an elevated platform for a castle and by default also creating a ditch around it, further increasing its defences.

Mounds are often smaller and there are examples noted to have homed structures such as windmills, they are also often a feature of designed landscapes, artificially created to provide elevated views over an area. 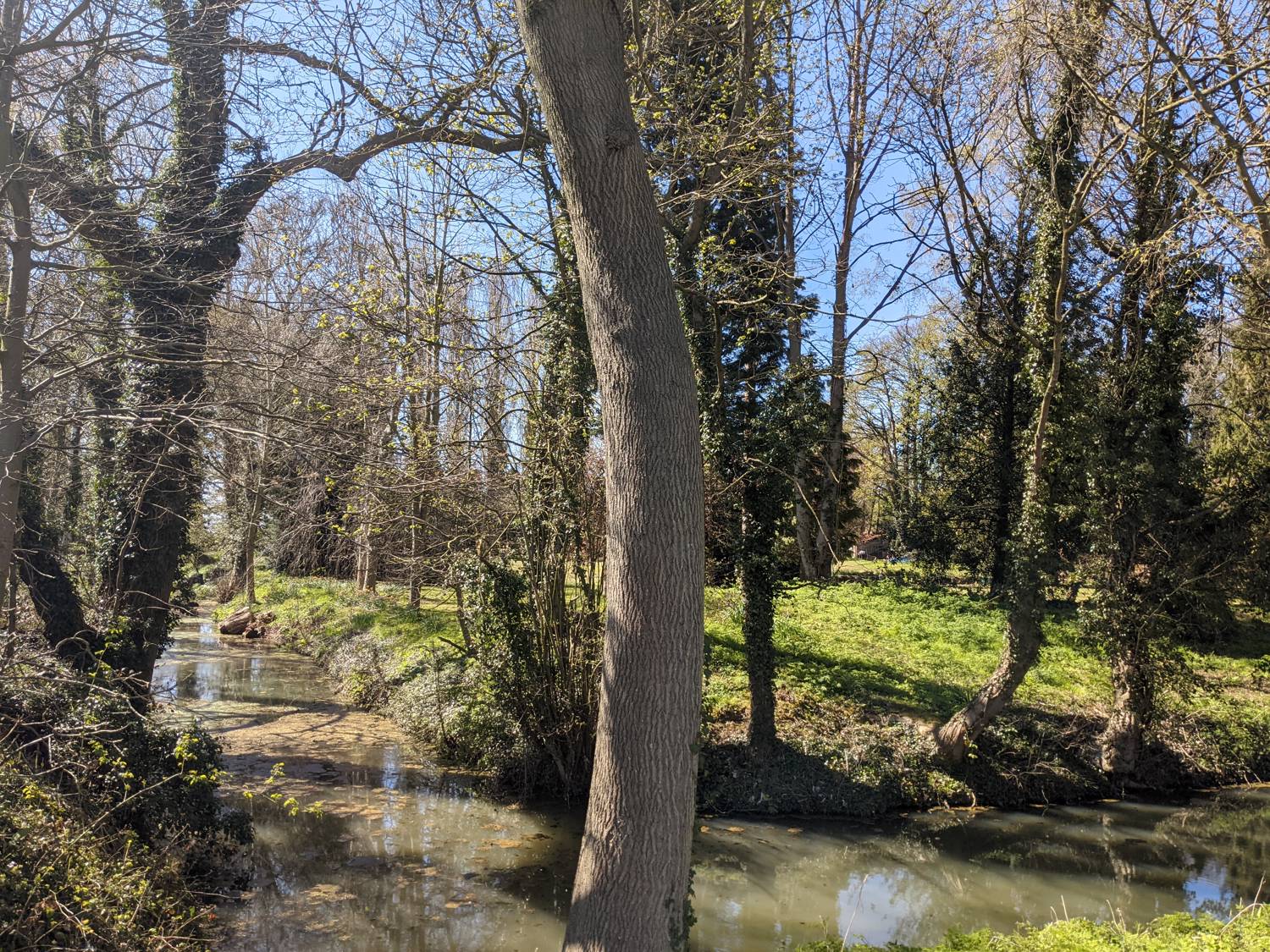 A moated site in South Kesteven. Only two arms are extant with a third noted only by a slight earthwork from backfilling.